Last modified by admin - 3 years ago 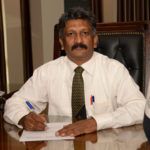 Professor Ariadurai obtained his Bachelor of Engineering degree in Mining Engineering from Osmania University, Hyderabad, India in 1983. Later, in 1987, he completed a Postgraduate Diploma in Technology in Textile Technology at the University of Moratuwa, Sri Lanka. He then joined a private textile company as a Quality Control Manager. In May 1988, he joined the Department of Textile Technology of the OUSL as an Assistant Lecturer. He won the Commonwealth Scholarship in 1994 and proceeded to the United Kingdom for his research studies. In March 1998, he was awarded the Doctor of Philosophy degree by the University of Manchester Institute of Science and Technology (UMIST), Manchester, United Kingdom.

He returned to the Department of Textile and Apparel Technology of the OUSL in January 1998 and served as a Senior Lecturer until 2008. He became a Professor in Textile & Apparel Technology in February 2009. He has also served as a Visiting Professor in Technical Textiles at the Textile Institute of Pakistan, Karachi from 2008 to 2009 and Head of the Textile Research and Innovation Centre, Karachi from 2010 to 2011.

He is an Associate of the Textile Institute - UK, Member of the Institute of Engineers - India, a Chartered Textile Technologist and a Chartered Engineer. Professor Ariadurai became the Dean of the Faculty of Engineering Technology in December 2012 and served in that position until he was appointed as the Vice Chancellor of the OUSL. Professor Ariadurai is an old boy of St. Anthony’s College, Kandy.