The Constitution of Sri Lanka ensures equality among all persons and prohibits discrimination on the basis of several grounds including sex (Article 12). The Constitution also guarantees to every person the freedom to engage in a lawful occupation (Article 14 (1) (g). Sri Lanka is a signatory to several international agreements pertaining to safe working conditions and non-discrimination in the workplace including the International Covenant on Civil and Political Rights, the Convention on All Forms of Discrimination against Women and the ILO Convention 111 on “Discrimination in Respect of Employment and Occupation.” Sexual harassment, including in the workplace, is a criminal offence under the Penal Code and the Prohibition of Ragging and other Forms of Violence in Educational institutions Act No. 20 of 1998 specifically deals with violence in universities among others. This policy is thus adopted in the context of international standards and the legal framework pertaining to universities which uphold the rights and aspirations of all staff and students in such institutions.

Acknowledging that gender-based discrimination and gender-based violence is a matter of concern in higher education institutions Sri Lanka.

Recognising that gender-based discriminations and gender-based violence the human rights of those subject to it.

Declaring its commitment to maintaining a workplace and a working environment that promotes gender equality and is free of gender discrimination and gender-based harassment or violence, and which shows respect for and acceptance of those of diverse gender identities.

Emphasising the need to prevent any form of discrimination against women and to take proactive measures to ensure that women in the university, whether staff or students are able to fulfil their role and functions on a basis of equality with men.

The OUSL Gender Policy is founded on the principles of rights, respect and inclusivity and good governance in the university.

This Policy shall be the guiding framework for achieving gender equality and inclusivity within the OUSL and shall apply to all stakeholders, including staff, students and other service providers in the institution.

a)  Mainstream gender into institutional policies, planning and budgeting.
b)  Create consciousness amongst all employees about the institution’s commitment to gender equity and its benefits.
c)  Increase understanding of and sensitivity to gender issues among university community members and stakeholders including tolerance for diverse gender identities.
d)  Incorporate an understanding of gender issues including gender equality into handbooks.
e)  Ensure gender sensitive and gender inclusive language and gender balance in all communications, images and publicity material of the institution.
f)  Create a Center for Gender Equity and Equality to initiate attitudinal change and monitor gender issues on campus.

a)  Ensure gender equality and empowerment in leadership and management among both staff and students,
b)  Appoint competent gender-sensitive people to senior positions in strategic areas of the institution as part of organizational policy,
c)  Establish a Center for Gender Equity and Equality consisting of gender-sensitive academic staff (both women and men), key administrative staff of the university and gender experts to initiate, implement and monitor the mainstreaming of gender equality within the university.

3. Freedom from violence and discrimination

a)  Ensure that interviews and selection procedures are gender sensitive and non-discriminatory.
b)  Promote a secure working environment which respects the dignity and equality of all persons.
c)  Adopt a policy of zero tolerance for gender discrimination and gender-based violence and take preventative measure against them.
e)  Take proactive security measures to ensure the personal safety of physically vulnerable categories of staff and students, for example, adequate lighting, security patrols, support in reporting violence.
f)  Refrain from imposing rules and strictures upon one category of staff or students relating to, for example, dress codes and curfews in hostels.
e)  Initiate transparent and participatory administrative procedures in both academic and administrative spheres so that there can be no space / opportunities for sexual and other forms of workplace harassment of either staff and students.

a)  Mainstream gender into research, teaching and innovation including curricula of all programmes and adjunct courses.
b)  Publish a gender equity and equality employee handbook for all employees.
c)  Make training on gender a compulsory component of Staff Development Training programmes and provide regular gender training programs for other academic and administrative staff members as well.
d)  Include gender awareness programmes for students and soft skill courses.
e)  Include training on transparent administration, participatory decision-making, and sensitivity to diversity and affirmative action.
f)  Undertake staff and student surveys to obtain regular feedback on policies/ measures to achieve gender equity and equality.

a)  Formulate Policy documents which articulate issues of gender equity and equality objectives, and equal opportunities in recruitment, promotion and training,
b)  Formulate Codes of conduct at the workplace
c)  Formulate a policy on sexual harassment
d)  Put in place a monitoring mechanism to ensure the sustainability and success of institutional initiatives
e)  Set measurable goals within specific time frames for achieving gender equality
f)  Integrate goals of gender equity and equality into the Corporate Plan and make adequate financial provision in institutional budgeting.

The University Council as the supreme governing body of the OUSL shall ensure that the Gender Policy is operationalized and shall receive periodic reports on such operationalization through the Center of Gender Equity and Equality.

The Vice Chancellor, together with the Board of Management of the Centre for Gender Equity and Equality shall provide leadership on gender issues and take all necessary initiatives to further objectives of this Policy.

Deans of Faculties and Heads of Departments/ Administrative Divisions shall ensure that the policy is implemented within the units coming under their purview.

All staff and students of the university shall support the policy and adhere to any rules, regulations and directives that may be issued in this regard.

Affirmative Action: A policy or programme of taking steps to increase the representation of a designated group/s seeking to redress discrimination or bias through active measures in education and employment.

Engender: The process of ensuring that planning and programming is appropriate for and takes into account the different needs and concerns of females and males.

Gender: refers to the social attributes and opportunities associated with being male and female and the relationships between women and men and girls and boys, as well as the relations between women and those between men. These attributes, opportunities and relationships are socially constructed and are learned through socialization processes. They are context/ time-specific and changeable. Gender determines what is expected, allowed and valued in a women or a man in a given context.

Gender Equality: means equality between men and women; the freedom to develop and make choices unhindered by gender stereotypes, roles and prejudices; that the different behaviors, aspirations and needs of women and men are considered, valued and favored equality. It does not mean that women and men have to become the same, but that their rights, responsibilities and opportunities do not depend on whether they are born male or female.

Gender Equity: According to the Concise Oxford Dictionary (7th ed.,1982) equity means fairness and it is also a recourse to principles of justice to correct or supplement law. It is in this sense that specific measures must be designed to eliminate inequalities  between women and men, discrimination and to ensure equal opportunities.  Gender equity leads in equality

Gender mainstreaming: This is a strategy for making women’s concerns and experience an integral dimension in the design, implementation, monitoring and evaluation of policies, programmes, activities and project at all levels in the social, economic and political spheres.

Gender Parity: This is a numerical concept referring to equal numbers of girls and women, boys, and men relative to their respective numbers in the population.

Gender Imbalance: Refers to a situation where there is no gender parity.

Gender Diversity: The equitable or fair representation of genders in a particular context, particularly an equitable ratio of men and women, but may include other gender categories.

Gender Based Violence: Refers to any form or act of violence that results in, or is likely to result in, physical, sexual or psychological harm or suffering to women, girls, men and boys on the basis of gender.

Gender Blind: Refers to a failure to identify or acknowledge differences on the basis of gender where it is significant.

Gender Mainstreaming: the process of assessing the implications for women and men of any planned action, including legislation, policies or programmes, in all areas and at all levels. It is a strategy for making women’s as well as men’s concerns and experiences an integral dimension of the design, implementation, monitoring and evaluation of policies and programmes in all political, economic and societal spheres so that women and men benefit equally, and inequality is not perpetuated. The ultimate goal is to achieve gender equality.

Gender stereotyping:  The assigning of roles, tasks and responsibilities to a particular sex on the basis of per-conceived prejudices.

Sexual Harassment: Unwanted acts of a sexual nature that cause discomfort to the targeted person. They include words, persistent request for sexual favors or dates, gestures, touching, uninvited sexual overtures, coerced sexual intercourse and rape.

Sex disaggregated data: Classification of information on the basis of sex; that is male and female.

Aims of the Centre for Gender Equity / Equality shall be:

The Objectives of the Gender Centre, shall be to:

Governing structure of the Gender Centre

Functions, responsibilities and reporting of the Centre for Centre for Gender Equity / Equality shall be to

(c) Implement the Policy against Sexual and Verbal Harassments

(e) Implement training and education programmes on gender for staff in collaboration with the staff Development Centre.

(b) The Director, Centre for Gender Equity / Equality shall be responsible for the direction, development and management of projects and programs and other activities that further the Gender Policy of OUSL.

(d) The Computer Application Assistant (CAA) shall be responsible for providing high quality, confidential clerical support to the Centre for Gender Equity / Equality.

(e) The Office Assistant shall be responsible in providing day to the support to the Centre for Gender Equity / Equality office.

(f) the Centre for Gender Equity / Equality shall prepare an annual work plan and submit it to the Senate and Council on the recommendation of the BoM for approval before a calendar year commences.

(g) Representatives of faculties shall be responsible for reporting and liaising between the Centre for Gender Equity / Equality and the respective faculties.

(i) The Director / Centre for Gender Equity / Equality shall convene the

(a) The Director / Centre for Gender Equity / Equality shall report directly to the Vice-Chancellor.

(b) At each BoM meeting the Director / Centre for Gender Equity / Equality shall submit a report on the activities that have been undertaken during the previous two months.

(c) Minutes of the Centre for Gender Equity / Equality BoM meeting shall be presented to the Senate and Council once in two months.

Regulations under this By-law shall be made by the Council, on the recommendation of the BoM of Centre for Gender Equity / Equality and the Senate.

This By-law may be revised or amended as and when necessary, Such revisions  or amendments shall come into force as determined by the Council, on the recommendation of the BoM of the Centre for Gender Equity / Equality and the Senate. 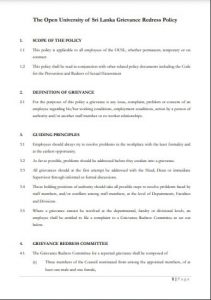 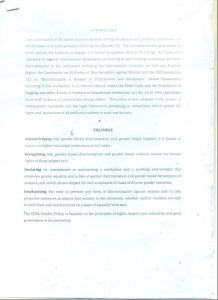 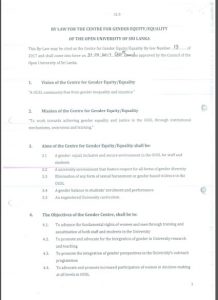 Code of Conduct for the Prevention and Redress of SGBV 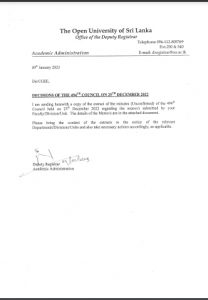