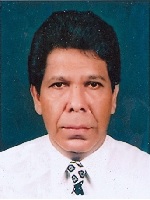 M A I Perera completed the Graduate ship in Chemistry Part I and Part II in 1982 from the College of Chemical Studies (I Chem. C, Sri Lanka) and became the best performer in both Part I and Part II and also obtained a free scholarship to follow the Part II free of charge in the Institute, Then he joined a Multinational Danish Company Elsteel limited, in the EPZ, Katunayake as a Chemist and was promoted as the Production manger and later the General Manager of the same company. He served in that Company for ten years and joined a Multinational Company in Sharjah, UAE as the Plant manger. Later he obtained a Post graduate Diploma in Industrial Engineering in 1985 from National Institute of Business. In 2006 he completed a Postgraduate Diploma in Counseling and Psychosocial Work from the University of Colombo. In 2007 he obtained a First class in Bachelors of Industrial Studies (BIS) in the field of Textile and Apparel Technology from the Engineering Faculty, Open University, Nawala, Nugegoda, He then joined the Open University Textile department as a Demonstrator in 2010 and after a year he became a Lecturer Probationary in 2011. He completed an MSc. In Psychology from the University of Madras in 2011. He also completed his MBA from PGIA, University of Peradeniya. He is having Diplomas in Quality management from Standard Institute, and Diploma in International Trade and Shipping

Effect of Social Stigma on Voluntary Turnover of Female employees

Use of locally available Banana Fiber to Develop Composites.