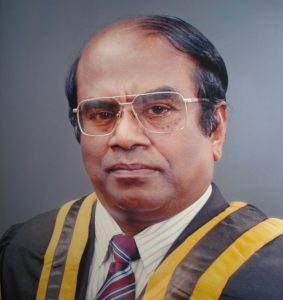 Majoring in Physics, Professor Lakshman Dissanayake received his B.Sc. (Honours) (1970) from the University of Sri Lanka, Peradeniya, Sri Lanka and his M.S. and Ph.D. (1977) in Experimental Solid State Physics from Indiana University, Bloomington, Indiana, U.S.A. He is currently a Research Professor and the Team Leader of the Condensed Matter Physics Division, National Institute of Fundamental Studies, Kandy, Sri Lanka. Prof Dissanayake was awarded the Emeritus Professorship by University of Peradeniya in 2011.

Professor Dissanayake has more than 40 years of undergraduate teaching and about 35 years of postgraduate level teaching and research experience. He has won many awards through the years as a great teacher and a research scientist: He won the CVCD (Committee of Vice Chancellors and Directors) Award for the Most Outstanding Researcher, Physical Sciences, Senior Researcher Category-2010, awarded by His Excellency the President of Sri Lanka on 16th December 2010. Prof Dissanayake was awarded the Sri Lanka National Award “VidyaNidhi” by Her Excellency the President of Sri Lanka in October 2005 in recognition of the scientific achievements and contribution to national development in the area of science, scientific research and science education.

Professor Dissanayake has made a number of significant contributions to secondary education in Sri Lanka. He has been a member of the GCE Advanced Level Physics curriculum revision team. He is the author of seven very popular Physics textbooks written in Sinhalese for GCE Advanced Level students. These books are now widely used by students and teachers in Advanced Level classes.

Professor Laskhman Dissanayake of the National Institute of Fundamental Studies, Sri Lanka  has been ranked among the top 2% of researchers in the world, included in the third edition of the science-wide author databases of standardized citation indicators-2021 based on an evaluation of over 100,000 top scientists in the world by Stanford University, USA.

Recipient of the Sri Lanka National Award “Vidya Nidhi” by Her Excellency the President of Sri Lanka in October 2005 in recognition of the scientific achievements and contribution to national development in the area of science, scientific research and science education.

Prof. M.A.K.L. Dissanayake was awarded the Hon D.Sc. degree by Wayamba University of Sri Lanka in May 2013 in recognition of his long term services to develop science education and scientific research.

Committee of Vice-Chancellors and Directors (CVCD Award) (2011) Awarded for the research excellence in Physical Sciences.

Recipient of the NSF Life Time Achievement Award from H.E. The President at the 50th anniversary golden jubilee celebrations of National Science Foundation held at the BMICH on 4th October 2018. This was awarded to recognize and honour eminent scientists who have made exceptional contributions to the Science and Technology sector in the country.

Recipient of the General Research Committee (GRC) Award of the Sri Lanka Association for the Advancement of Science (SLAAS), 2015.

Receipient of the NSF SUSRED (Support Scheme for Supervision of Research Degrees) Award from NSF awarded  on 25th July 2018 at BMICH for the supervision of PhD Student  Ms. H.N.M. Sarangika within 4 years.

Award of Emeritus Professorship by University of Peradeniya, 2011.

Received a Certificate of Commendation by NSF for Basic Scientific Research, Awarded in 2013.

Vidya Nidhi (Dr.)  Malavi  Achchi  Kankanamge  Lakshman DISSANAYAKE was   the first Professor of Solid State Physics and Senior Professor at University of Peradeniya.  He obtained his Ph.D. in 1977 from Indiana University, Bloomington, Indiana, USA specializing in  Experimental Solid State Physics and returned to Peradeniya in 1977 as a Lecturer in Physics.  At that time, there was hardly any research activity in Physics at Peradeniya.

After spending a year at Chalmers University of Technology, Sweden, in 1984/85, working on Lithium ion based Solid Electrolyte  materials (intended for Lithium reachargeable batteries) , he returned to Peradeniya and took a keen interest to develop research and post-graduate training activities “from scratch”. He played a leading role in initiating the solid state ionics research project and M.Sc. level post-gradate courses during the 1985-1992 period.  He, along with Dr. M.A. Careem, was largely responsible for the receipt of major research equipment and training fellowships  for post-graduate students from the International Programmes for Physical Sciences, Uppsala University, Sweden.  During this initial period of his research career, Dr. Dissanayake was able to establish many important  international  scientific contacts which enabled  the solid state ionics  research  project  at Peradeniya to reach  international standard by making notable contributions to the advancement of the scientific knowledge in his chosen field.  He has up to now published nearly 200 research papers out of which about 80 are in international refereed journals. He was the Chairman of the organizing committee of six international research conferences on solid state physics and solid state ionic materials and two international conferences  on science education and physics education held in Sri Lanka, and was the Editor of the Proceedings of four of these international conferences. Dr. Dissanayake was also the Editor in Chief for six years of the Ceylon Journal of Science-Physical Sciences, an annual publication of University of Peradeniya. Currently he is the Editor-in-Chief of “Ceylon Journal of Science” (the after merging the Physical Sciences and Biological Sciences issues), the only quarterly journal published by our university system.

Dr. Dissanayake has supervised or co-supervised  15 Ph.D.s,  20 M.Phil.s and 21 M.Sc.s up to now and still he is mentoring several MPhil and PhD students at NIFS.. The first ever Ph.D.in Physics to be awarded by a Sri Lankan University was supervised by Dr. Dissanayake and his colleague Dr. M.A.Careem in 1986-1990 period. This was a significant achievement for Peradeniya and a turning point in the research history of the Physics department. In 1992, upon the recommendation by an international panel of experts, the European  Economic Community  awarded  Dr. Dissanayake’s group a research grant worth over Rs.6.5 million  for a three year research project to develop new solid state ionic materials, to be carried out jointly by the universities of Peradeniya, Aberdeen, UK and INPG, Grenoble, France.  This project resulted several novel lithium ion conducting solid and glassy electrolytes suitable for the next generation of lithium batteries, many research papers,  research equipment for Peradeniya and also trained two Ph.D.s. specialized in novel Lithium ion conducting materials.

Dr. Dissanayake’s research interests cover several different areas of solid state Physics and Physics Education. These include, solid state ionic materials and solid state batteries, optical properties of solids, photovoltaic semiconductors, solar cells, high temperature superconductors and interactive computer based Physics teaching.  As a Visiting Research Fellow at the Institute of Fundamental Studies, Kandy during 1987-1992 period  he developed experimental facilities from scratch for carrying out research on high temperature superconductors and  trained  a Ph.D. student in this fascinating area of Physics.  Dr. Dissanayake spent his sabbatical years as Visiting Research Fellow at Chalmers University, Sweden (1984/85 & 2000/2001) and  at Oklahoma University, USA(1993/94),  as Visiting Professor at University of Aberdeen, UK (1992/93) and  as Visiting Professor at University of Illinois at Chicago, USA (2008/2009).

Dr. Dissanayake has also contributed to university administration as Head of the Department of Physics at University of Peradeniya  for five years;  from 1989 to 1991 and again from 2000 to 2001. He  has also served as Acting Dean of the Faculty of Science on few occasions.

Dr. Dissanayake played a key role in the formulation and planning stage of the Postgraduate Institute of Science(PGIS) at Peradeniya in 1996.   He was the Chairman of the Board of Study in Science Education of the PGIS for 8 years (2000-2008) and the full time Director of the PGIS for 5 years (2003-2008).  As the Director of the PGIS, he was largely responsible for initiating several nationally important M.Sc. programmes for the first time in Sri Lanka; These are the MSc programmes in GIS and Remote Sensing, Disaster Management, Nanoscience and Nanotechnology and Medical Microbiology. He was a member of the Standing Committee on Science (1994-2003) and a member of the Standing Committee on Postgraduate Education (2003-2008) of the University Grants Commission. Dr. Dissanayake was also a Member of the Board of Management of the National Science Foundation for 4 years (2005-2008), Member of the Biard of Governors of the National Institute of Fundamental Studies (2011-2018), Council Member of the National Research Council (2016-2018).  As a member of many important national level committiies at NSF, NRC, NIFS, NASTEC and  PGIS,  he has been able to contribute to the development of the S&T sector in the country.

Dr. Dissanayake has made a number of significant contributions to secondary science education in Sri Lanka.  He is the author of seven very popular text books in Physics written in sinhalese language for GCE advanced level students. These books are now  widely used by the students and the teachers in advanced level classes.  Dr. Dissanayake was a founder member of the Science Education Unit (SEU) of the Faculty of Science and was an active resource person at many science camps organized by the SEU until his retirement. Dr. Dissanayake has actively participated in promoting Physics Education by associating with the Asian Physics Education Network (ASPEN), affiliated to UNESCO during 2003-2008. He has participated and organized in several ASPEN workshops overseas and has organized two successful workshops in Sri Lanka on Interactive Methods of Physics Teaching. In recognition of his contributions to Physics Education in Sri Lanka and in Asia, he was elected unanimously as the Chairman of ASPEN for a five year period from 2003 to 2008.  He was also an Associate Member of the International Commission on Physics Education (ICPE) affiliated to IUPAP and UNESCO. Dr. Dissanayake was also an Associate of the International Centre for Theoretical Physics (ICTP) at Trieste, Italy for about 10 years.

Dr. Dissanayake was appointed by Her Excellency the President of Sri Lanka as a Member and the Convener of the Presidential Task Force on Integrated R&D in Science and Technology for the govt. of Sri Lanka in 1997-2000. He was a member of the Ministerial National Committee set up for drawing up the five year Strategic Plan to develop Science and Technology in Sri Lanka, 2011-2016.

Dr. Dissanayake has received several national awards for his research excellence.  He was awarded the NARESA Merit Award for Scientific Research in 1993, the Presidential Awards for research publications in from 2001 to 2017. In 2007, Dr. Dissanayake and Dr. M.A. Careem was awarded the National Science Foundation Award for 2007 in the field of Basic Sciences.  In appreciation of the services rendered by him for the development of scientific research and science education in Sri Lanka,  Dr. Dissanayake was awarded the Sri Lanka National Award “Vidya Nidhi”  by Her Excellency  the President of Sri Lanka in October 2005. In 2010, he received the CVCD Research Excellence Award from H.E. the President for the Most Outstanding Researcher in Physical Sciences, Senior Researcher category. Dr. Dissanayake was the reciepient of the SLAAS GRC (General Research Committee) Award for research excellence awarded in 2015 and NSF SUSRED Award in 2018 for the training of PhDs.

Dr. Dissanayake received the NSF Life Time Achievement Award from H.E.The President at the 50th anniversary golden jubilee celebrations of NSF held at the BMICH on 4th October 2018. This is awarded to recognize and honour eminent scientists who have made exceptional contributions to the Science and Technology sector in the country.

Dr. Dissanayake retired from university service on 30th September 2010 after serving the university for nearly 40 years. Currently he is a full time Research Professor at the National  Institute of Fundamental Studies, Kandy, Sri Lanka. Dr. Dissanayake was awarded the D.Sc. (Honoris Cuasa) by University of Wayamba, Sri Lanka in 2013 in recognition of his servives to Physics Education, Physics Research and Science Education in Sri Lanka.

Dr. Dissanayake is currently (2018) making a pioneering contribution to the development of solar energy sector in Sri Lanka by being the principal coordinator and researcher in the Muti-university four year R&D and training project to develop R&D and manufacturing of prototype thin film solar panels during 2016-2021. This is administered by the Ministry to Science, Technology and Research and initiated through his collaboration with University of Illinois at Chcago (UIC)and Sivananthan Laboratories, Inc., USA (Prof. S. Sivananthan). This project is intended to train the much needed Solar Tecnicians and R&D level scientists needed for the country in the coming years and to contribute to the national economy by manufacturing thin film, solar panels in the country for domestic use and for export.