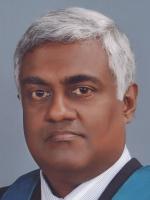 I Graduated in 1980 with BSc, Specialisation in Chemistry, from University of Colombo, Sri Lanka. After a short spell as a Temporary Assistant Lecturer in chemistry at University of Colombo (1980 – 1981) I commenced my higher studies in University of Alberta, Canada and received a PhD in Chemistry in 1987. Thesis research work was in the field of theoretical ion-atom collisions. Then I worked as a Post-doctoral fellow for 3 months in the department of Chemistry, University of Alberta. Thereafter I worked as a Post-doctoral fellow at The Joint Institute for Laboratory Astrophysics, University of Colorado, USA (1988 – 1989). Subsequently I took up a Research Associate post in the Department of Chemistry at Texas A & M University, USA (1990 – 1992). Post doctoral research was in the fields of theoretical ion-atom collisions and photo-ionisation. Towards the end of 1992 I joined The Open University of Sri Lanka as a Senior Lecturer in Chemistry. At present I am a Professor in Chemistry. I was the Head of the Department of Chemistry (1999 – 2002) and the Dean of the Faculty of Natural Sciences (2004 – 2007) of the Open University of Sri Lanka. I was the leader of a team which planned and initiated the development of the Management Information System (MIS) of The Open University of Sri Lanka (under the Department of International Development, UK project) (1997 – 1999). I was the leader of the IT Team which initiated the development of the present MIS (2001). I was the leader of the team which developed the proposal for the Higher Education for the 21st Century – Quality Innovation Grant received by the Faculty of Natural Sciences and was the project coordinator during its implementation (2013 – 2015). I am a member of the team appointed by the Ministry of Education for the development of a proposal for integration of STEM Education in primary and secondary schools in Sri Lanka. My current research interests are in the fields of Open and Distance Learning and Science Education.